The readings for this week and next sound odd to my ears, particularly given the secular “holiday season” is upon us. Unlike the sparkly cheer we see and hear everywhere we turn, both the Old Testament and gospel talk about the end of life. Death and other major transitions have a way of bringing things into perspective in a hurry. What’s important — really important? What’s less so? And how do we adjust our lives to reflect this new understanding?

If we take a closer look and seek a more carefully considered perspective, I wonder what we might learn from the differences between the culture in which we are immersed and the moments we encounter today in Scripture.

In the reading from Samuel, we hear the last words attributed to King David. Though it’s in the form of a poem, I think of it as the final public speech of his reign. Though he spent much of his life as a mighty (though short) warrior, today I imagine an elderly king hobbling to the podium. He is aware the time of returning to his ancestors is near. And he has accepted this. 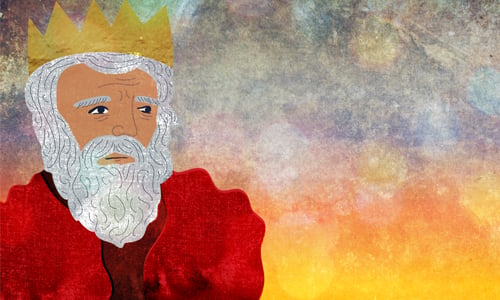 In this speech, David gives glory to God, and calls on his audience — and by extension, us — to do the same. He gives thanks to God not only for anointing him king but for simply being God. As we know well, David’s response to God wasn’t always perfect. (And there is more than a little arrogance in his speech!) But at his best, David strove to rule the precious people given into his care with justice and compassion. At his best, his actions showed an understanding of God’s glory, a respect for that glory and a respect for the privilege of leadership. Earlier in his life, winning battles was the most important. At the sunset of his life, worshipping God simply for God’s glory and caring for those under his rule eclipsed that. Living into the Way of Love took precedence over everything else.

Today’s Gospel recalls Jesus’ encounter with Pilate. It’s a familiar passage but one we don’t expect to hear outside the context of the Passion story.

Perhaps there was a moment in the Garden of Gethsemane when Jesus could have walked up the hill and out of town. He could have fled and waited to return until cooler heads prevailed. That moment had passed hours before. He discerned his call was to remain in the Garden, to hold the course. After His arrest, he became a cog in a wheel propelled forward by events beyond his control.

As David stood before the people, acutely aware of what was to come, so Jesus was acutely aware of his fate. He may not have had the power to stop events, but He did have control over His response to Pilate. “My kingdom is not from this world,” He informs Pilate matter of factly. He followed a Divine call to show the world a better way to live by loving others, even — and especially — those the world deemed unlovable. The Way of Love always had been, and continued to be the one, most important thing for Jesus.

It was so important, He willingly remained in the Garden, awaiting His fate.

Like King David and like Jesus, the Holy Cross community stands on the threshold of a major transition…It’s an opportunity to reflect on where we’ve been, where we want to go, and who we want to be. What’s important, really important, to us as a church community?

Like King David and like Jesus, the Holy Cross community stands on the threshold of a major transition. Ours isn’t as permanent as a death, but it is an ending, with a future full of unknowns and uncertainties. I think this ending presents a number of opportunities. It’s an opportunity to celebrate not only Father Mike and his work but ourselves as a community. It’s an opportunity to reflect on where we’ve been, where we want to go, and who we want to be. What’s important, really important, to us as a church community? How do we view God and ourselves, regardless of who sits in the rector’s office? What is God’s call to our community, and how do we respond to that call?

Knowing that we worship the God of Love and are loved by God infinitely, we strive to give glory and thanks, and to share that amazing love with others. In response to God’s glory and God’s love, we worship God, we learn and teach our faith, we participate in mission and outreach and we provide pastoral care to those in need. Each of these core areas is stronger with your participation, not only in terms of prayer, but also practically and financially.

The call to worship the God of glory and share that love with others is incredibly urgent. It’s one which needn’t wait, which shouldn’t wait for anything or anyone. It’s far too important for our own spiritual well-being and a world in need. And it’s at the core of who Holy Cross is as a people.

So, come join us. Join us as we worship the God who loves us and the world infinitely. Join us as we serve a world in need. Don’t wait! The world needs to know the depth and breadth of God’s love.

The world needs you now, and so do we.